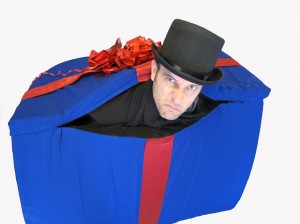 A Monster Theatre for Kids Production

The world’s most feared and grumpy theatrical impresario has created an extravaganza of Charles Dickens’ A Christmas Carol featuring a cast of nearly one hundred actors, singers, dancers, musicians, jugglers, and fire eaters.

It’s opening night, but due to the impossible demands being made on them, all the actors have quit just prior to the first performance…all except one, that is! Not wanting to refund the tickets for a sold-out opening night, the curmudgeonly producer declares that the show must go on. The lone remaining cast member, not wanting to disappoint the throngs of children with their mums and dads who have filled the theatre, agrees to help out.

Together, they take to the stage and perform the entire play themselves!

A Christmas Carol is booking up fast in Nov/Dec 2012!