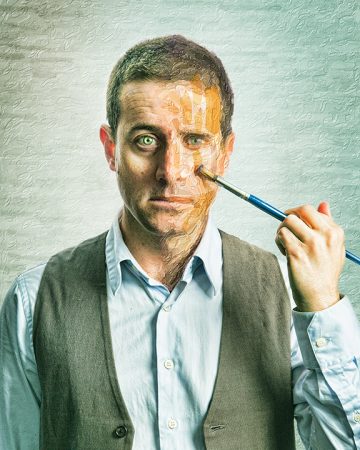 Critically acclaimed Visually Impaired visual artist Bruce Horak lives with 9% of his vision and has, over the last two years, painted a series over 400 unique portraits which attempt to capture the way that he sees, aptly named The Way I See It. 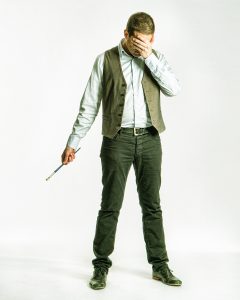 As he tells the story of The Way I See It, the tale of Canadian painter Tom Thomson’s unsolved murder is interwoven throughout, including the truth and lies behind the mysterious death of one of Canada’s greatest artists and the subsequent rise of The Group of Seven. The mystery takes you from the tiny community of Canoe Lake, to the hallowed halls of our nation’s capital, and eventually on to the World stage.

Art, politics, greed, ambition, love and murder are intertwined in a one-man

As he reveals his controversial perspective on Canadian Art History, he shares the unique way he sees the world through an

original portrait of each new audience.

“Horak crackles with energy…he’s unbelievably fast on his feet.” – The Chronicle-Herald (Halifax)

“All anyone could talk about after the show” – The Peak Magazine

“Delivering lines with timing to set your atomic clock by.  The man was impeccable.” – Plank Magazine

“Bold and almost shocking in its originality…I haven’t quite seen through the eyes of a blind man, but I’ll probably never get closer.”  -Kelowna Daily Courier, in response to The Way I See It at the Kelowna Art Gallery

Written by and Starring Bruce Horak