Monster Theatre presents the world premiere of War and Peace, a one-man adaptation by 16 year Fringe veteran Ryan Gladstone. Join Ryan as he takes the audience on a journey through the greatest novel ever written, War and Peace, and the 632 characters it contains, as well as the life of Tolstoy himself. War and Peace runs as part of the Vancouver Fringe Festival, September 8-18, 2016 at The Carousel Theatre.

War and Peace is the most written about novel of all time, and yet, its full meaning escapes us… until now! Over the course of re-enacting the story, Ryan tries to pinpoint the true meaning of the book. Bouncing between concepts like Tolstoy’s theories on the nature of history (“A king is history’s slave.”), success (“All success is a mirage.”), self-improvement (“Everyone thinks of changing the world, but no one thinks of changing himself.”), wisdom (“The only thing that we know is that we know nothing.”) and the power of love (“everything that I understand, I understand only because I love.”). In the end we realize that War and Peace’s true beauty lies in its 10 000 simple moments. Pierre sharing a potato. Andrei noticing the sky for the first time. Natasha climbing in bed with her mother to talk about a boy. Princess Marya holding her weeping father like a child. 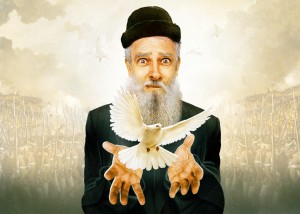