Read all about it, and mark your calendars for when the show comes to your city! 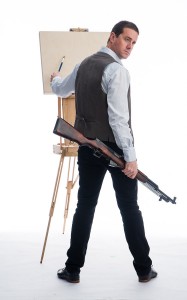 Written by and Starring Bruce Horak

What the critics are saying about Assassinating Thomson…

“I have never experienced a performance quite like this; its originality and energy are inspiring. A Canadian Masterpiece!”
– New Ottawa Critics
Read the full review here.

“A gripping story!” 9/10 – The Grid, Toronto (From Best of the Fringe)
Read the full review here.

“If the murder mystery element of Assassinating Thomson doesn’t grip you, then Horaks’ charm and humor definitely will.” – New Ottawa Critics
Read the full review here.

“Totally seduces us… A special kind of theatre that might even be the origin of a new genre called  “serious stand-up of the feel good kind”.  Very special indeed. “ –Capital Critics Circle, Ottawa
Read the full review here.

“This is my favourite show of 2013 to date. Bruce is really engaging. He channelled TJ Dawe a bit as he wove the parts of his story together in his own way. And the painting at the end was terrific.”
– Audience Review of Assassinating Thomson in TO

And…the one somewhat critical review received a triumphant rebuttal from another writer with the same publication!
“A masterful storyteller!”
-mooneyontheatre.com
Read the full Review here.

“Horak crackles with energy…he’s unbelievably fast on his feet.” – The Chronicle-Herald (Halifax)

“All anyone could talk about after the show” – The Peak Magazine

“Delivering lines with timing to set your atomic clock by.  The man was impeccable.” – Plank Magazine

“Bold and almost shocking in its originality…I haven’t quite seen through the eyes of a blind man, but I’ll probably never get closer.”  -Kelowna Daily Courier, in response to The Way I See It at the Kelowna Art Gallery

Assassinating Thomson is Coming to a Festival Near You!